Bolted connections are by far the most important connections in industry. Increasingly lighter machines and plants require smaller bolt sizes, with higher quality materials that must be fastened closer and closer to the yield strength. This requires higher accuracy. In addition, documentation of the tightening process as proof to clients and insurers is growing. Fully automated processing of a tightening protocol introduced by work preparation minimize the risk of errors. HYTORC has right solutions.

More than 99% of all industrial bolted connections are torqued -with a moment- to preload. Usually the criterion of a desired end moment is used. However, more and more often, control is applied based on an angular rotation or even yield strength. Constructors are increasingly able to calculate the minimum and optimum preload of bolted connections. HYTORC has developed products to meet these increased requirements.

To reduce the chance of operator errors, the trend is towards fully automatic processing of entered tightening protocols. To reduce the chance of material and construction errors, there is a trend in critical applications to use a second parameter as a check on the first (VDI 2862-2). Operators are immediately informed if something is not OK. It can then even be set up so that clearance from higher up is required to be allowed to resume the assembly process. The parameters are documented and used as evidence for engineering, clients and insurers.

We present the most important and frequently used methods.

Statistic evaluation of the measured proces parameters. Can also be used as a measurement device for proces capability analysis (PCA)

The torque-controlled tightening process is suitable for all screw connections up to torques of approximately 200,000 Nm. In torque-controlled tightening, a certain tightening torque leads to a preload. Studies show that approx. 90% of the torque/energy is used to overcome friction and approx. 10% is used to realize bolt load. This relationship is largely determined by the friction between the connection components and the application. The prerequisite for an accurate result is a known and stable friction. Factors affecting friction include: Lubricant, surface condition of bearing/turning surfaces, shear and bending forces during assembly, dimensioning and material specifications. The VDI 2230 Guideline* shows that under conventional conditions, an accuracy in bolt load of ±17% to ±23% can be expected. At least, if the surfaces of components to be joined are of good quality and the threads and bearing surface of the nut are square.

A HYTORC hydraulic torque wrench works with a piston that moves up and down, combined with a reaction pawl. The reaction pawl is an extra provision that ensures that in non-ideal bolted constructions, the set moment actually reaches the nut. This pawl is necessary for long bolts, high torques, or a springy support point. In such cases, the torque angle can become equal to the tool’s branch angle so that the nut moves back and forth but does not rotate with respect to the bolt. The reaction pawl prevents recoil of the insert during the return stroke and thus ensures net transfer of torque to preload.

Mechanical optimization of the joint that improves accuracy

In torque-controlled connections, torque is often taken as the reference value for accuracy. However, what matters in all connections is accuracy in bolt load. Therefore, in addition to accuracy of our tools, HYTORC also focuses on accuracy of the bolt load by optionally adding two thread systems: 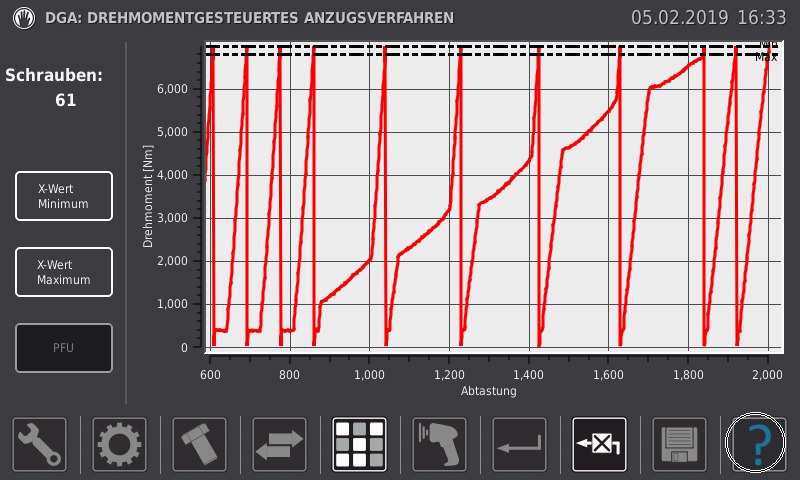 The angular rotation method indirectly measures the elongation of the bolt. The condition is that the measured angular rotation is used for this elongation. Therefore, it must be ensured that before starting the angle measurement, all joints are pressed together seamlessly by the joint torque. And that the parts to be built together can handle the surface pressure. There is a relationship between the pitch x angular displacement x construction factor (L/D ratio, modulus of elasticity) and the achieved bolt extension. All deformations caused by upsetting and tensile stresses affect this. For gasket flanges this method is therefore not suitable.

This tightening method is particularly suitable for bolted connections with short clamping lengths and is often used in production lines.
VDI2230 aanhaalfactor: αA 1,2 -1,4 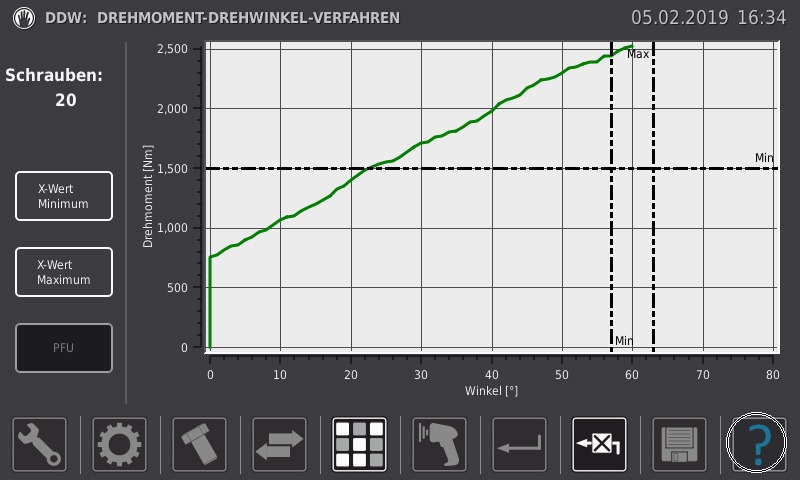 Elasticity-controlled tightening is a very well-proven method which has been used in the automotive industry for several decades. In this method, bolts are tightened to the yield strength/elasticity limit of a unique joint during the tightening process. Thereby, the yield strength is used as a control parameter for determining the bolt load. The objective here is to make maximum use of the strength potential of each unique bolt, as this differs from bolt to bolt. A material strength class says something about the minimum tensile strength of the material, however, manufacturers apply a safety margin and the bolt has latent reserves.

Regardless of the coefficient of friction under bolt head or on the thread, the bolt is tightened to its yield point. During assembly, the quotient is calculated by dividing the torque and the angle made on each other. At the point where the quotient changes significantly, the elastic limit of the joint has been reached and the system will stop the assembly process. As with the torque-angle method, the joint must first be tightened to a starting or joint torque before the angle of rotation can be measured. Often the cut-off value of the gradient can be set. Because the bolt is only very marginally plastically deformed (<0.2Rp), even bolts with a short clamped length can be tightened using the yield strength controlled method. Bolted connections cannot break under strain controlled tightening. See note VDI-2230 – Nov. 2015 Table A8. Bolts can also be reused.

The question is often asked whether there is then sufficient reserve for dynamic load during operation of the plant or application. The answer is yes. For this purpose, it is used the fact that when bolted connections are tightened, not only an axial stress, but also a torsional stress is generated due to the thread friction. The reference of the yield strength is determined by the resultant of both loads. Immediately after the torque is removed, the torsional component springs back by about 50%. As a result, the bolt load decreases, and the joint regains an elastic reserve that is sufficient for any dynamic loads during operation. The remaining torsional stress largely dissipates over time and under the influence of vibration. This is usually a process of days or weeks.

This method is particularly suitable for steel-on-steel connections with short to normal clamped lengths, as for example in structural engineering.
The Eco2Touch control system controls, monitors and documents all process parameters such as: date and time, operator, end moment, angle and any set control bandwidths. The hardware is comprehensive but the implementation (read: operation) is simple because the process is fully automatic. The operator only has to start the pump system. The system will switch itself off when the connection is completed within the set parameters and confirm this by means of an acoustic and visual signal. The method is therefore also suitable on construction sites and can be used for ‘one-off’ applications without the need for calculations and preparation.. 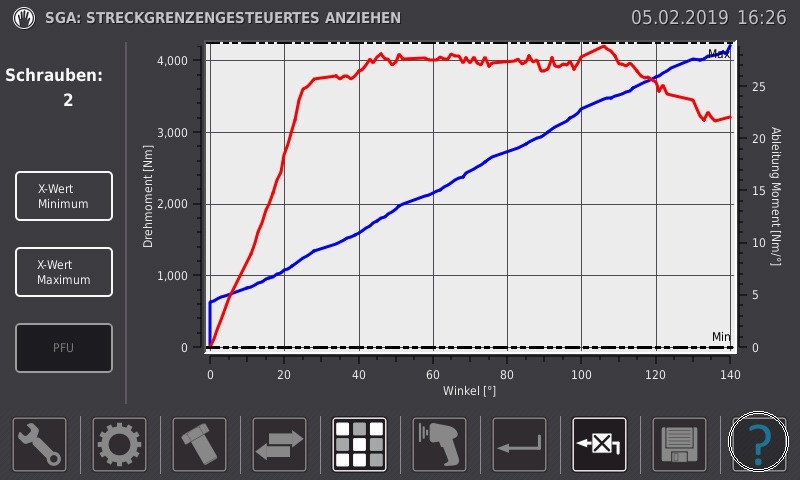 Tighten beyond the yield strength

In the case of over-elastic tightening, either the moment-angle method is used as a basis, or the yield strength-controlled method in combination with a turning angle. In the case of the moment-angle method, prestressing is carried out first at a joint moment, after which a turning angle provides the final prestress. In the case of yield stress controlled tightening, pre-tensioning is done first at the yield point and then a turning angle is created. In both cases, the bolt is pre-tensioned in the plastic zone, which means, however, that bolts and nuts cannot be reused. It ensures maximum utilization of material capacity and bolt strength. The durability of the connection is thereby greatly increased:

The control parameter in this tightening method is the desired torque, where the achieved rotation angle is the reference/monitoring parameter at the end of the process. The rotation angle serves as a second control parameter. With this, for example, the gouging of a bolt or, on the contrary, the unintentional flow of a bolt can be recognized. The method fits in well with the most commonly used method (moment-controlled) and therefore does not require modification of the protocol. It does, however, offer extra security in case of deviations, as the rotation angle is monitored as a second parameter. 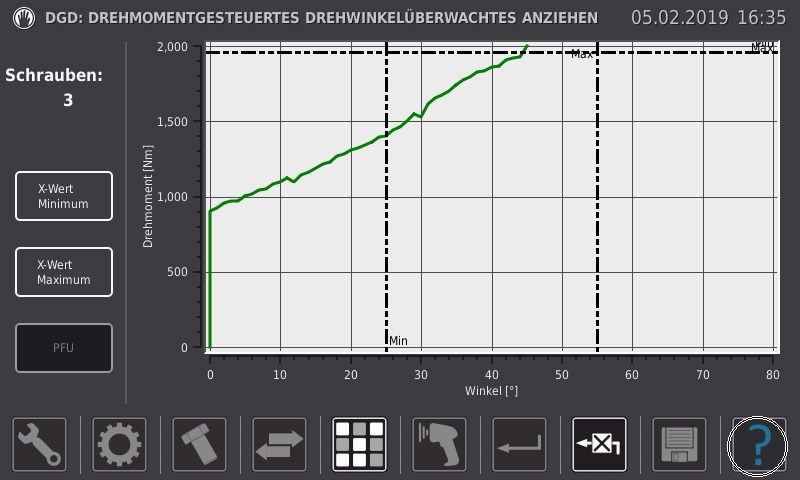 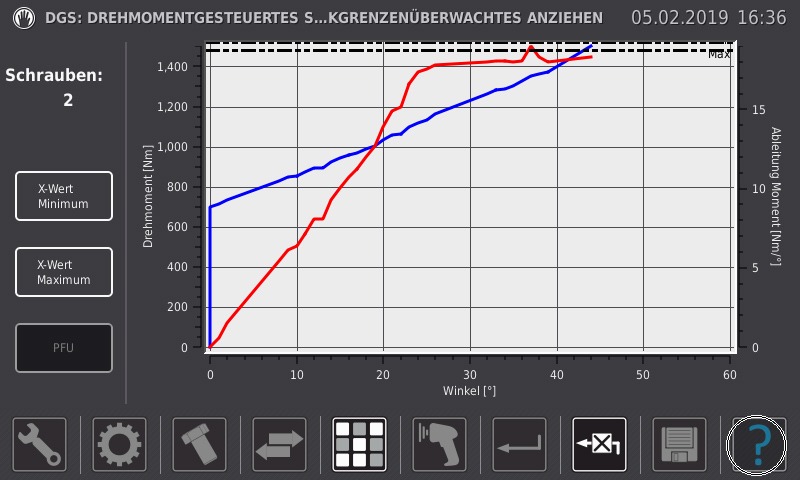 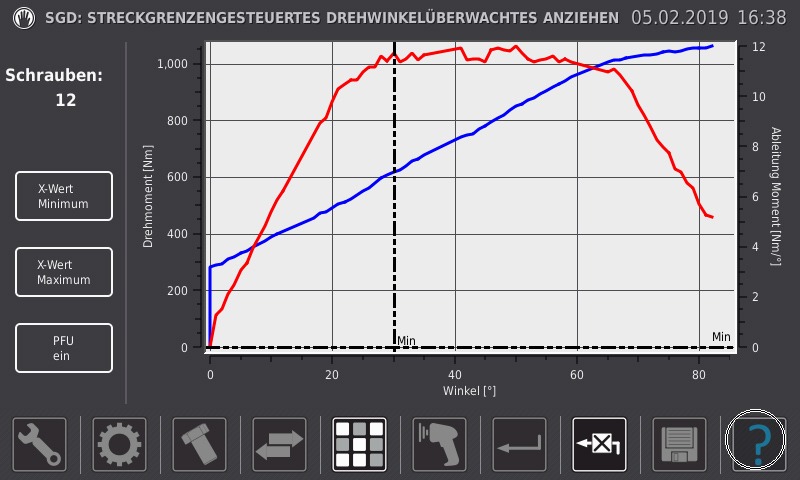 In this tightening method, the control parameter is the target torque as well as a value from other external measuring equipment, for example a load cell/bolt force meter. Once the external equipment indicates the target value, the assembly process is stopped. This requires a continuous measurement and is usually in the form of a current signal. 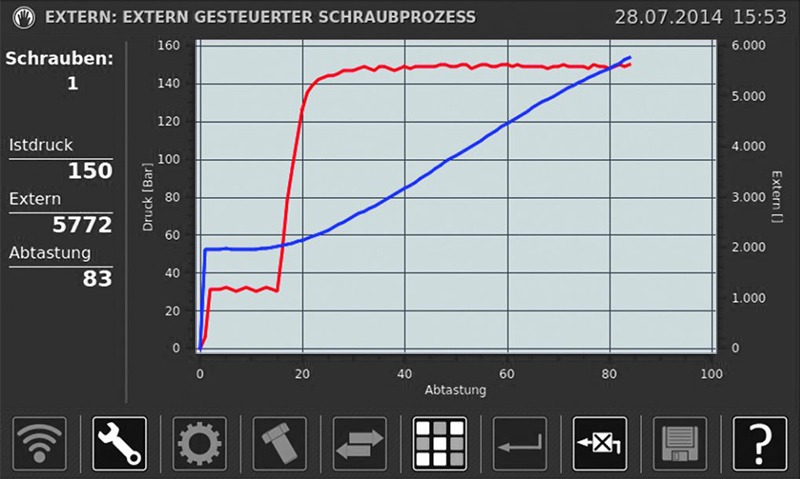 Analysis of the rotation angle (ANA/DAT)

This analysis module determines the throughput angle of a bolt from a defined starting torque (usually 50% of end torque) to reaching the defined end torque. In this assembly method, the end torque is the control parameter. The clearance angle made serves as an indication of the preload before re-tightening the bolt. This method is often used for retightening/checking bolted connections.

This module allows all available assembly methods to be performed in any order.

Statistical evaluation of measured process parameters. Can also be used as a measuring device for process capability analysis (PCA).